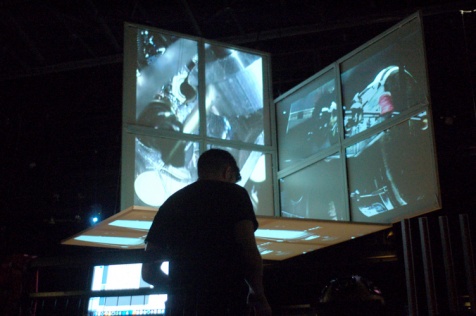 The Machine Orchestra is a networked ensemble of laptop performers inspired by the Princeton and Stanford Laptop Orchestras. In performance, each member of the ensemble uses hemispherical speaker to produce localized sound, while a master server coordinates millisecond-level OSC synchronization between performers. This networked aspect is critical to the inclusion of the heart of the Machine Orchestra -- the robots. In the inaugural performance at REDCAT on January 27th 2010, the ensemble played with three of the previously developed robots: MahaDeviBot, GanaPatiBot, and TAMMY.
Students in the MTIID program are given compositional freedom in their upper-level years to compose new ensemble pieces, while simultaneously learning the art and practice of building these electro-mechanical music machines through the Robotic Design class taught by Ajay Kapur and Michael Darling. Running concurrently with Interface Design, many students are given the task of integrating their new hardware musical interface with the ensemble and robots.