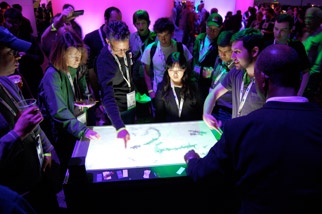 Bricktable is a multi-touch & tangible user interface table created by Jordan Hochenbaum and Owen Vallis, two undergraduate students at California Institute of the Arts. Both musicians, the idea for Brick came out of a conversation between Jordan and Owen, discussing how to sonify data in a way that was both musical and meaningful for the user. Ultimately leading to Weather Report, the first piece of custom software the two wrote to interface with Brick, the future and functionality of Brick looks as bright and as modular as its inception.