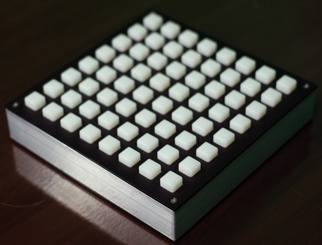 Developed in 2005 by CalArts Alum Brian Crabtree, the original Monome has become of the most widely used, open-source computer music controllers of all time. In 2008, Jordan and Owen set out to create a software-compatible clone of the Monome using the Arduino Microcontroller. A cheaper alternative to the typically expensive Monome, there are over 1000 Arduinomes in the wild and counting. More recently in 2011, Owen began releasing schematics and code related to an updated Arduinome called the Chronome, integrating RGB LEDs and pressure sensitivity.