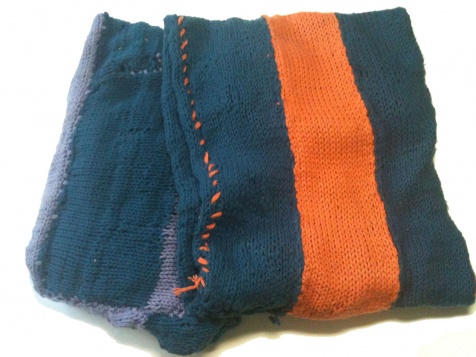 The push_push sensors were made on a circular knitting machine. While knitting regular yarn, conductive thread is tied to the yarn and pulled through the machine with it. The first strips contained isolated patches of conductive thread, with power and ground connected to each, and were connected to a microcontroller with circuits suited for variable resistors. To reduce the instances of lines to power, the next version of push_push contained a single, unified patch of conductive thread inside a knitted strip. Power is connected at a central point opposite multiple points connected to ground. The points closest t o power maybe thresholded such that an undistorted sensor is measuring evenly for every point. As the sensor is distorted, pulled, pushed, twisted, folded, or touched with anything conductive, the total resistance, which is fairly high normally, is reduced. The point closest to the distortion reflects its proximity and the position of the distortion is visible in the incoming data. To keep the resolution consistent for the latest version of push_push, the ratio of data points to power is n-1. The microcontroller used in push_push is the Xbee series 1 radios. Two of these radios were used in conjunction with the Lilypad Xbee breakout, and a third was used as a receiver on a USB dongle. The Xbees were set up using CoolTerm, sending AT commands shown below. In a serial window in Max/MSP the identity of each sending radio is visible in the 6th digit in the serial stream, and the last pairs before the checksum reflect an analog input each (base 256).

The incoming data is scaled and may quickly be adjusted on the fly in the event that a connection breaks or becomes unreliable. The connections inside push_push are knots of conductive thread around circular hoops made from 22-gauge wire. The thin hookup wire is stripped for sever inches, folded around a hoop, and twisted back on itself like a guitar string before being soldered and heat shrunk. Two matching strips of inactive knitting are crocheted on either side of the active strip, with a triple wide strip crocheted to the back for sandwiching the electronics. The Lilypad portion of the sensor circuit was protected in a pouch, but after several performances in which soldered connections inside broke from being folded, the radio and hard soldered components are now protected in a small plastic case.