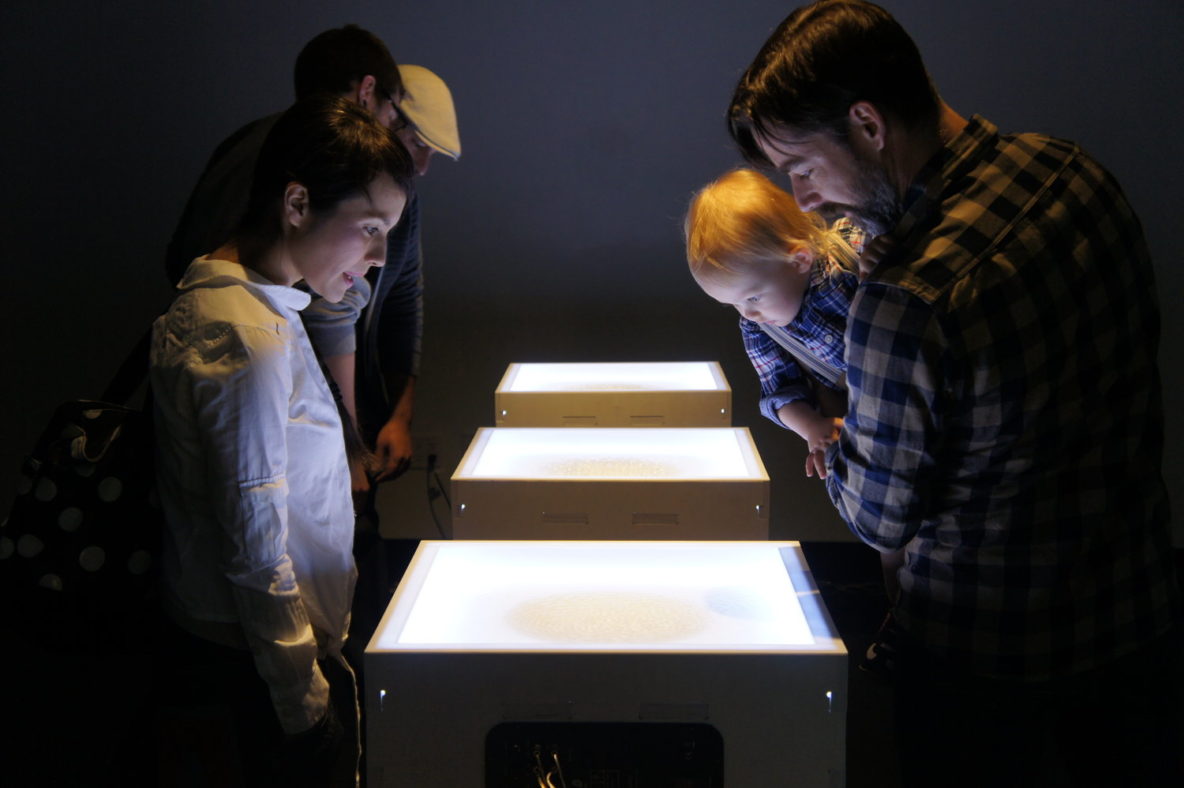 NODE is a reactive real-time audio/visual installation that centers around the concept of Cymatics (modal phenomena), which is the study of visible sound and vibration.  Within the space, there are four large, identical cubes, each separated by two feet.  At first, these cubes sit stagnant and appear to serve no real function.  However, once a visitor approaches a cube, the cube slowly activates, lighting up and revealing a basin of water.  At the same time, a low frequency tone starts to emanate from within the cube.  As the tone gets louder, the liquid at the surface starts to react and complex, fractal-like patterns start to form on the surface.  The sound from the cube is then re-enforced by surrounding satellite speakers that reproduce a higher equivalent fundamental frequency of the original tone.

Each cube functions as a discrete system, so as the visitor approaches a different cube, the first cube slowly fades out and the new cube activates, creating a different tone with a different complex pattern.  However, the cubes are also interlinked.  Therefore, if two people interact with two different cubes, both cubes will begin modulating one another, effecting the sonic and visual outcome.  If all four cubes are activated, the patterns and sound generated becomes much more chaotic and unstable.  It is possible, for example, to be in the space watching this event and not realize there is any reactive or interactive component to the piece until someone abandons a cube.  At that point, the abandoned cube slowly begins to fade out and all of the remaining cubes that are still active become less chaotic; more clearly defined.

Essentially, NODE works like a large, interactive FM synthesizer, where each cube functions exactly like an “operator” in FM synthesis, with the ability to generate its own tone, as well as to modulate another.  This “morphing” that occurs when more than one person is viewing the piece is a key element in terms of the interactive component of NODE.

The ability for someone else to impact what you, as a viewer, are experiencing gives the piece a social component.  Since the patterns that occur in the liquid are directly related to the sound being generated, the viewer gets a window into what the sound actually looks like.  NODE provides the viewer with unique insight into the invisible world of mechanical waves as they exist in nature.  The more complexity within the sound, the more complex the pattern.