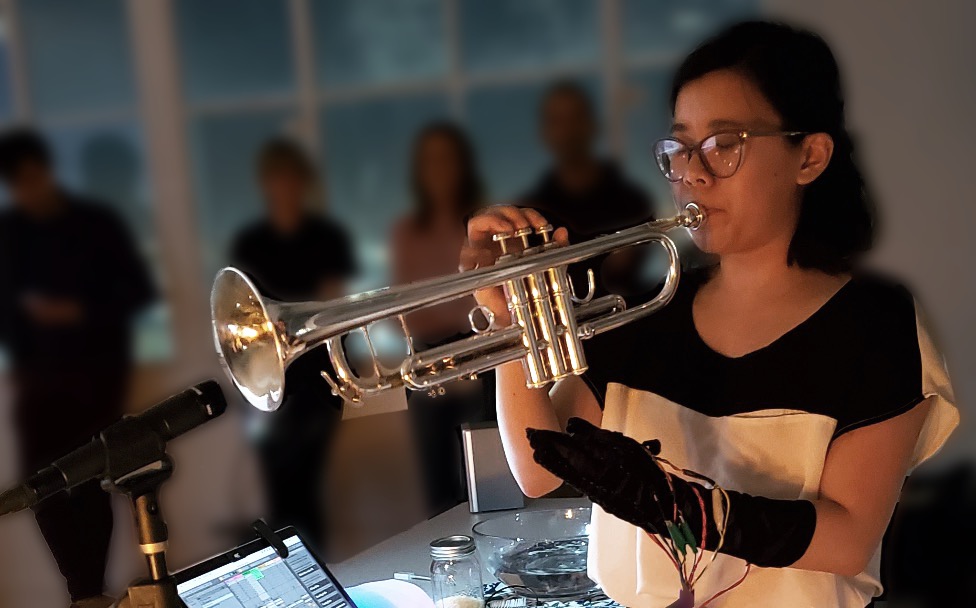 Nami is Sara Sithi-Amnuai’s custom built glove interface designed for live electro-acoustic musical performance, improvisation, and a tool to extend her own multicultural background – primarily drawing from and contributing to the augmented trumpet, Nikkei, African American music, performer-composer, and gestural repertoires. In the most recent iteration, Nami utilizes a force-sensitive-resistor (FSR), flex sensors, buttons, hall effect sensors, and a photoresistor. Nami is a flexible instrument allowing the user to use their own gestural vocabulary to extend their cultural body. While some musical interfaces, DAWs, and musical notation software are culture specific in which the purpose, intent, and material reflect and privilege a particular cultural framework (i.e. Sibelius privileges the Western notation system), Nami is designed to be culture general and flexible valuing cross-cultural exploration and accommodating a variety of cultural gestural language rather than imposing a culture specific framework or gestural language. Sara has written about her usage of Poieto (otherwise known as "The Cultural AI Design Tool"), an exploratory research and design tool developed by Christine Meinders, in the creation of Nami in her paper, “Exploring Identity Through Design: A Focus on the Cultural Body Via Nami” to be published in the proceedings of the International Conference on New Interfaces for Musical Expression (NIME), 21-25 July 2020.