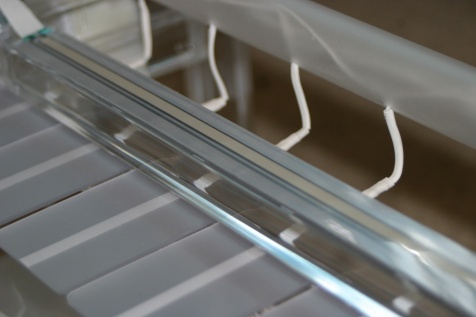 The interface is called the flexichord, in reference to the harpsichord. It’s keyboard-like in the arrangment of its triggers (a linear row). Comprised almost entirely of acrylic, it alternates between transparent (crystal clear) and translucent (frosted) with a few appointments being opaque white. Twelve bend sensors are used, enabling a chromatic scale to be played, for the maximum balance of an economy of triggers and musical versatility. There are also two membrane potentiometers placed just above the ‘keys’, allowing easy access while playing. It’s got an hyper modern aesthetic and it’s fairly compact, portable, and light weight.