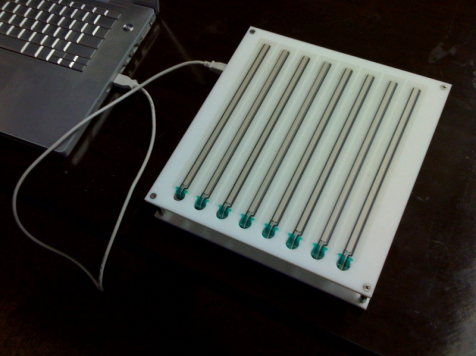 The FaderBox is eight membrane potentiometers mounted on a square plexy box. This is a very simple yet useful tool. It gives analogous control to the realm of computers. It was inspired by the Monome, which is the opposite of the FaderBox. The Monome only has buttons which gives on and off. The FaderBox is continuous control, which sets it aside other controllers. It helps interpret the usage of a laptop in a very musical way. The faders hold the value that was last used. This happens with a basic sample and hold set up. Then in the code, there is a smoother that helps smooth the stepping from value to value. Also, since the code sends out numbers 0 to 1024, one could program it to control what ever is suitable for the current situation.
Something to change about the FaderBox would be adding light representation of the faders. Installing either LED’s or LED faders that correspond with the membrane potentiometers would achieve this goal. This would give a better experience to the audience as well as the user.